Bucksburn & District Juniors is our hugely successful system for beginners and young players. “Dedicated to teaching youth through music” Is the bands strength in making sure we continue teaching. The juniors also take part in many exciting events including Highland Games, Concerts, Festivals, Weddings, Functions and Ceilidhs

It has always been recognised that youth is essential to the well-being and future of the Band. From very early on young players such as Ian Blair, Billy Cruickshank, Billy and Bobby Forrest, John McDougall Jnr, Jock Proud and Alistair Webster, helped provide that valuable mix of youth with experience. A long association with the Boys’ Brigade and the Bucksburn Band has resulted in young players being drafted to the band. 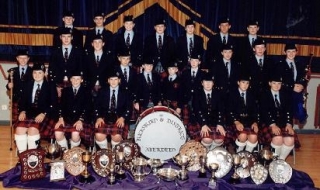 That connection was made possible through Pipe Major D.C. Duncan who, for a great many years, was Pipe Major of the Aberdeen B.B. Battalion Pipe Band. Sandy Robertson, piping tutor for many years with the 47th Culter B.B. Company also contributed to the provision of young players. The greatest push for youth, however, came in the 1980’s when the Novice Juvenile Band was formed in 1984.

Getting the Junior Band established was a significant achievement. The vision of Pipe Major Jim MacDonald in driving a youth policy forward is a great milestone in the history of Bucksburn Pipe Band. The Youth set-up is so important in the North-East where the pool of players is smaller than in the Central Belt – this importance can be seen in the number of players who have developed in the Junior Band and now serve in the Senior Band.

The fund raising achievement of the members and parents is an ongoing concern, it is always a challenge to kit out a vast range of small shapes and sizes. Much appreciation should be shown for the extra efforts of all of whom have played an important part in tutoring the Junior Band over the years.

Another crop of youngsters on the start line at their first ever Major Contest, Pitlochry 2006

Like the Senior Band, the Junior Band is focussed on the competitive elements of pipe banding. As with many youth bands, there is a cyclical element to the Junior Band, as the band rises up the competition ladder as a group, and then begins the process again with a new group of young Pipers and Drummers.

In 1997 with P/M Lyndsey Spiers (nee McDonald) and the expert guidance of P/M Ian Dallas, the band rose to the challenge against a strong Seafield band to win the British, Cowal (band and drumming) and World Pipe Band Championships en route to picking up the Champion of Champions prize.

The Novice/Juvenile band again climbed its way up the Grade over a 3 year period to reclaim the Scottish, British, and World Champions titles in 2008. Runners-up at Cowal was enough to be crowned Champions of Champions without travelling to the European Championships in N. Ireland. The Drum Corps also won the Scottish Championships during a very sucessful campaign.

We currently have over 20 learners spread between piping and drumming and approx 30 members within our youth band. 2013 marked the first major competing season for our most recent Novice Juvenile band.