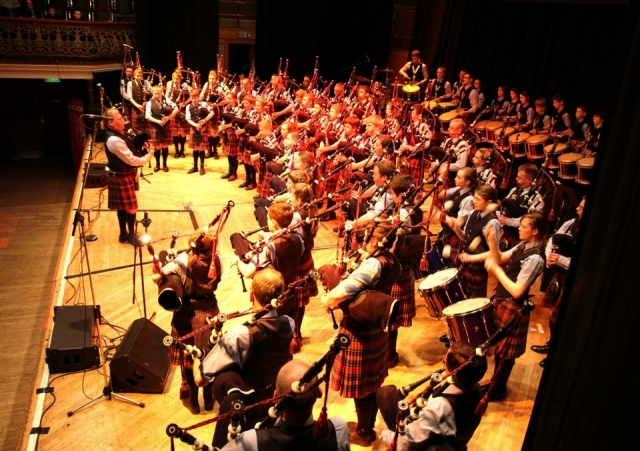 The North of Scotland piping and drumming fraternity was out in full force on Saturday 10th March. There was a great buzz of anticipation filling the famous Music Hall in Aberdeen. One or two well known faces from the central belt had also made the trip. Some to be entertained and some to check out the progress of two of Scotland’s main contenders for the 2012 silverware. Everyone was expecting the best of stuff from Scotland’s latest up and coming superband – Inverary & District.

Much to the delight of the hosts Bucksburn & District the main auditorium was ” stappit fu “, the lights dimmed as the crowd fell silent and the hosts took to the stage in a very slick and professional manner fielding no less than 19 pipers. They really stunned the audience with a very dramatic opening – a rendition of Don Bradford’s tune Alex McIntyre and Paul Ritchie’s hornpipe The Black Sheep. This really caught me on the back foot. They weren’t simply going through the motions of a warm up support act, they obviously meant business – great arrangements, solid sound and the band was punching way above its weight with an air of confidence. I know from personal experience playing like this only comes from the comfort of a good winter’s practice and these boys and girls certainly didn’t seem to be intimidated in the presence of the best of Argyllshire. Bucksburn played 7 sets in the first half, MSR, 3/4’s, 6/8’s, jigs and hornpipes. A nice balanced programme which encompassed the whole Bucksburn organisation culminating in a set that showcased 85 band members from novice to senior band. One noticeable thing about the young novice players apart from the obvious ability to play was the posture. Good visual posture and physical command of the instrument is something that is sometimes lacking in very young students. Not the case on this occasion, in fact they looked like they owned the stage.

Inveraray opened up with the well known Duncan Johnston tune ” Farewell to Nigg ” starting with Pipe Major Stuart Liddell playing an immaculate set of MacRae drones that projected pure Argyllshire sweetness, full tone with all the harmonics, followed by instant unison when the other 18 pipers joined in with great synchronised style. The band played very well throughout the first half. A very homogenized style of piping with great ease and poise delivering intellectual phrasing to the classic tunes. Enjoyable listening despite occasional overcooked harmonies and counterpoints. These players hold the theme notes and address the short notes as an art form that’s second nature to them. The overall sound of the band was occasionally spoiled by dominating drums fighting with the acoustics and spiking through too often. Good technical power house drumming is good to hear at the appropriate parts of the music, but hearing it too often can dilute the effect.

They followed the first set with a March, Strathspey and Reel starting with David Ross of Rosehall. This March is a popular solo piping tune and is very difficult to play at pipe band tempo without losing the music. Hornpipes and Jigs followed before leaving the stage to solo piper Ian Wilson, a promising youngster with great fingers, who started with the slow air Aye Fond Kiss and followed up with a few Gordon Duncan tunes. A surprise in the evening was the emergence of Murray Henderson walking on stage playing the piobaireachd ” Too Long in This Condition ” on another great sounding instrument. The whole pipe corps joined in guided by the expertise of a master piper resulting in a very young pipe corps playing a really mature presentation of the tune with great feeling. After this the band gave us a short medley starting with The Water is Wide followed by a set of classic jigs. The crowd were ready for the interval and a chance to discuss the qualities of the nights performances.

In the second half Bucksburn continued to consolidate the night with no less than seven more sets with some well thought out inclusions. A set in memory of the late Pipe Major David Duncan and a tribute to the soldiers – Royal Wootten Bassett – was well received by the audience. The band left the stage after a good nights work showing that in his second season as Pipe Major Neil Selbie and leading drummer Mike Haggart are starting to make their mark on the band which promises to bear fruit in the not too distant future.

Inverary opened up by unveiling their 2012 medley, unusual in design with a very contemporary first half starting with ” Ceilidh Lines”, ” Let the Cold Wind Blow ” and Allan MacDonald’s ” The Handshaker “. A more traditional second half included, “John Morrison of Assynt House ” and ” Alick C MacGregor “. For me the second half was much stronger as a band. But as we all know it is only March!! Another half a dozen sets contained all the ingredients of a concert menu including 2/4’s. 3/4’s, a suite and a first class drum fanfare led by current World Solo Drumming Champion Steven McWhirter. Playing in concerts is often a long and arduous task for the performer not to mention the strain on the bagpipe. Apart from minimal drifting drones the band held their sound fairly well throughout the evening. They finished with a Breton Air and set of 9/8 jigs. This band plays with great punctuation and understanding of the Scottish idiom – in short they make it look easy. For me when they play in the Scottish idiom they are at their very best. Occasionally they lapse into rhythmic gymnastics by taking a classic tune and changing it into a very abstract rhythmic time signature. This is a modern trend that many top bands are formulating and often taking on to the contest park as well as the concert stage. Love it or hate it, Inveraray are one of the best bands at showcasing this rhythmic skill set. With them it’s always played well and a crowd pleaser but often melodically weaker than the original format for me, but that did not spoil the overall music of the concert. A great night of piping and drumming and the crowd were well entertained.

The compere for the evening was Pipe Major Jim Campbell, himself an ex-member of Bucksburn & District Pipe Band. Well edited words keeping the crowd informed but still letting the programme flow smoothly.

This annual event is getting stronger and stronger. Well supported and appreciated by a great crowd enjoying the music. Congratulations to the personnel of both bands, a super night well organised and great value. A fine taster with the forthcoming season not even two months away. How do you improve on this next year – more of the same would be the simple answer.