The Red McPherson tartan is synonymous with the Bucksburn and District Pipe Band. In the very early years the Band turned out in uniform which was rather different. The kilt, not suprisingly in the North-East, was the Gordon and the tunic a battle dress blouse dyed blue. Leather sporrans, balmorals and socks in lovat green completed the uniform. Clearly, this livery, first donned in 1948, was considered to be of a temporary nature only for discussion begun in 1949 on selecting a uniform that was to become the trademark of the band.

Several tartans were put forward for consideration, including the Gordon, two were short-listed – the Red McPherson and Royal Stewart. A large majority of members chose the former influenced by a rather fine kilt in Red McPherson owned by Piper Bill Maitland which was pleated in the highly distinctive military style to the yellow stripe. An excellent choice had been made for that tartan has been admired by many for so long at home and overseas. 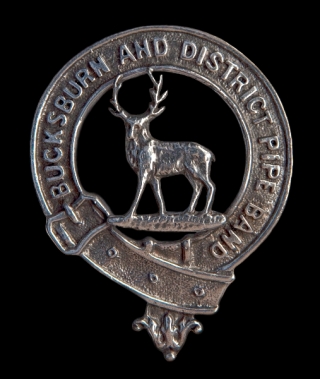 Bill Maitland influenced too the selection of the Band emblem when he designed the cap badge in 1948. Some since then may erroneously recognise the emblem as a stag and make the inevitable connection with the crest of the Gordon Highlanders. Bill’s thoughts at that time were related to his home and surroundings rather than things of a military nature when he produced his drawings of the badge. The emblem is simply the Buck drinking at the Howes Burn from which the district of Bucksburn draws its name.

The band turned out in its new uniform in 1951. The Band recognised that the acquisition of the new uniform was helped greatly by the fund-raising efforts of John McDougall Snr. The notable red flashes worn with the hose arrived a short time later having been knitted by the wives of the Band members. When the band added a Drum Major – Bill Skinner – to it’s ranks in 1954, considerable discussion ensued for some time about his uniform. Indeed there was some debate as to whether the Drum Major’s sporran should be supported by a leather strap or chain !

The next significant addition to the Band uniform came in 1960 when feather bonnets were acquired although the idea of the wearing of them was first mooted in 1958. Although perhaps looked upon less favourably by playing members as being less than comfortable, this latest head-gear added greatly to the majestic appearance of the Band.

The acquisition of the No 2 Uniform in 1978 was major milestone in the history of the Band. The rationale for a second uniform was simple. It was to provide greater comfort to the playing member, especially during competitions and would help to conserve the No 1 dress. A special meeting of the Band was held in the Bucksburn British Legion in October 1977 when it was agreed that the uniform would comprise a navy jacket, blue shirt, black leather sporran and ghillie brogues.

Today, the band uniform is largely the same as that adopted in the 70s. The Red McPherson kilt and pale blue shirts still make a dynamic combination, and are set-off nicely by navy blue waistcoat and jacket. Navy socks, red macpherson flashes, ghillie brogues, band tie and glengarry hats complete the No 2 outfit.