The band has taken on many memorable travels, both at home and overseas. The band made its first major excursion in 1954, to take part in the festivities at the Stromness Shopping Week. This memorable trip was to be repeated in 1956. Also significant in that year was the Band’s trip to Belfast to participate in the World Pipe Band Championship. Getting there though was less than straightforward with members travelling by train to Glasgow in the first instance on different days. The Band then flew en masse out of Glasgow to Belfast and went on to give a very worthy performance on a day when the weather was exceptionally warm. 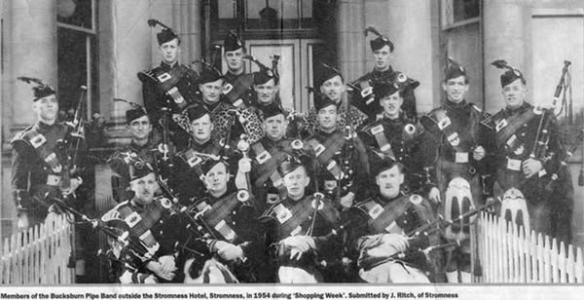 Members of the Bucksburn Pipe Band outside the Stromness Hotel, Stromness, during ‘Shopping Week’ 1954

For those members playing in the 1970’s, the Band trips unsurpassed for them were undoubtedly five trips to Toronto each lasting over a week in the August of 1972, 1973, 1975, 1977 and 1979. Bands from all over the UK together with others from various parts of the world were invited to perform at the Canadian National Exhibition in Toronto as part of the World Scottish Festival and the Inter-Continental Pipe Band Competition. Many thought the first to be a trip of a life time which made the rendition of “Will ye no come back again?” by the many thousands of spectators perhaps all the more poignant on the last night performance at the CNE.

The unforgettable memories from these trips include impromptu appearances on the floor of the Toronto Stock Exchange in ’72, ’73 and ‘75 that did not exactly bring trading to a halt but certainly slowed the pace of trading!

Issoudun in the Berry region of France was a popular destination for the Band where it took part in a folk festival in 1975, 1980 and 1984 together with groups from different parts of France and Europe.
On arrival at our destination we were hived off and stayed with various families. Thus we were exposed to family life in a culture vastly different to our own but were treated to some wonderful hospitality and despite real language barriers we managed to make ourselves understood. Bass Drummer Graeme Beattie’s ‘universal Doric’ as always stood him in great stead.

The return journey in 1980 was memorable for the arduous waiting time.  Long hours of patiently waiting for trains tested our resolve but spirits generally were kept up as we recounted the experiences – participating in the French folk dancing; Piper Donald Cruickshank’s unusual placement of two sticks of French bread; the hurdier gurdie playing and the somewhat noisy clog dancers with whom Piper Joker Watt seemed familiar when he quipped – “that’s the bu***rs that bade abeen me at Kintore Place!”

One of the more poignant moments during the 1984 trip was a rendition of Sleep Deary Sleep played to a French audience who sensed the mood of the tribute to the memory of Piper Joker Watt. Perhaps the French family with whom he had stayed during the visit of 1980 and who missed him greatly in 1984, appreciated even more the haunting musical commemoration.

The trip to Copenhagen in the February of 1989 when the Band was represented at indoor competitions was the first of two overseas visits that year – the second in August being to Eksjo in Sweden. The contrast between the two trips, however, may be summed up by recounting that Drummer Michael Brown did not see the need to eat cat food while in Sweden preferring instead to donate his life savings toward a round of drinks during a stop at Stavanger airport.

In September 1997, the Golden Jubilee year, the band flew to the coastal resort of Arenzano, described as the gateway to the Ligurian Riviera. The Band took part in events organised to promote the 13th Mare e Monti di Arenzano – an international event for hikers set in the steep hills behind the town. No one on that trip will forget the excellent hospitality extended or the impromptu sing-a-long sessions in Bar Calcangno and the ever appreciative audience! 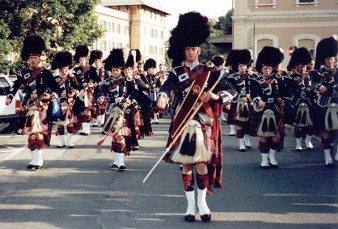 In 2000 members of both the senior and junior bands made the longest trip yet, to Taiwan. The band was to play at the opening ceremony of a huge department store, comprising B&Q, Hola and a number of smaller chains. The president of Hola – Tony Ho – had been to Scotland on holiday, and had seen a Pipe Band playing at Glamis Castle, and wanted a band to open the store. Ironically, the band he saw was our close neighbours, Grampian Police! The band spent a week in Taipei, visiting temples, markets and dining in some extraordinary restaurants. The band also took part in the local Children’s Day celebration, where a presentation was made to the city mayor. 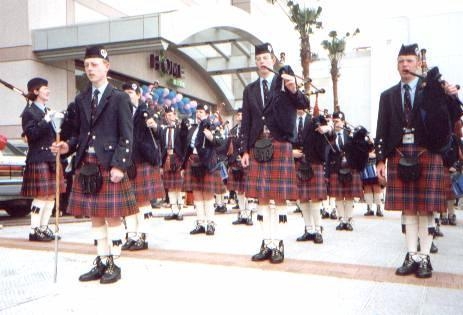 Following the Taiwan trip, the Juvenile band was asked in the same year to travel to Belarus with Aberdeen City Council as part of the twin city agreement with Gomel, the second largest city in Belarus and one badly affected by the Chernobyl Disaster in 1986.  Along with another musical group from Aberdeen the band performed at a variety of events as part of a week-long arts and cultural festival.

Memorable trips though are not contingent upon the crossing of expanses of water and a number of engagements at ‘home’ are equally worthy of note.

The Bucksburn Royal British Legion Armistice Parade around the 11th of November in each year is easily the Band’s longest standing engagement. Having played in 1947, the Band has continued each year to the present time and is proud to have had this long association with the British Legion and this distinguished engagement which has an important place in the Band’s heritage.

The Band has played at some other special events too and demonstrated a willingness to support good causes.

In 1964 the Band was congratulated on its fine performance at the final concert of the Mod when a charity recital was held in aid of Mod funds. Two rather different engagements due to the cause supported took place in 1989 and 1990. The Band participated in the Anti Apartheid Movement parades down Aberdeen’s Union Street thus helping to back the ending of racial discrimination in South Africa. Help with a cause much nearer to home was given in 1991 and 1992 when the Band took part in marches concerned with the Save the Gordon Highlanders Campaign – a crusade unlike the previous cause that was sadly to fail.

The memory of the engagement on Sunday 7 September 1997 at Pittodrie Stadium will remain with the members who were there for a very long time. For Pipe Major Elrick it was a particularly unforgettable event. The occasion was the World Cup Qualifier between Scotland and Belarus. While the football match held in Aberdeen was notable, the real honour came at the very beginning when Alex was asked to play a lament in memory of Diana, Princess of Wales whose funeral was held the previous day. Alex played “The Flowers of the Forest”, in the centre of the field – a moving tribute that was witnessed not only by the capacity crowd at Pittodrie but by several million national television viewers.