Over 300 members past and present have devoted time, energy and sociability to the Band since 1947. Every organisation needs its leaders and administrators. The Band Officials from 1948 to the present day are listed below: 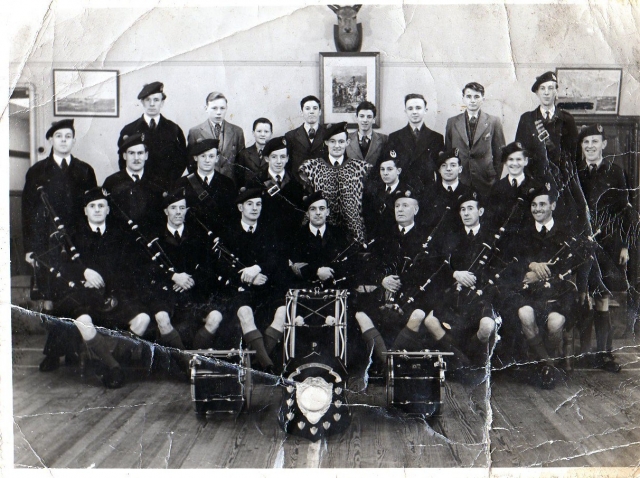 It is remarkable that the Band had just two Pipe Majors – the key post in the organisation – between 1947 and 1989. The Band recognises firstly the immense contribution of Pipe Major David Duncan whose enthusiasm over nearly thirty unstinting years of service set high standards which the band strives to maintain. Following Davey’s retiral, Jim MacDonald gave a highly commendable twenty years of service – thirteen of which as Pipe Major.

Following his retiral from the Band, Jim MacDonald donated a trophy in February 1991 – The Jim MacDonald Trophy – to be awarded at the end of each season to the Junior Band member who demonstrated the most in terms of progressing their playing and helping those around them. The first recipient of that trophy was Drummer Mark Thomson.

Although around for only a short time as a member, D/M Gordon Jelly (pictured with P/M D.C. Duncan) had a lasting influence on the standard of drumming in the Band. Gordon, originally from Motherwell, started his life-long drumming career as a twelve year old in the Boys’ Brigade. He tutored a great many drummers including the legendary Alex Duthart and eventually became Drum Major with Shotts and Dykehead Caledonia in 1948 when the Bucksburn Band was getting established. The first practical help Gordon gave to the Band was his personal involvement in selecting new drums. In 1950 he was persuaded by Pipe Major Duncan to tutor the drum corps on a part-time basis. This involved him travelling to Aberdeen by train on a Sunday and spending the whole day with the corp. Eventually Gordon joined the Band for a season before emigrating to Australia in 1952 where he died on 12 February 1997. The Band is proud to have had an association with such a great drumming talent.

The professionalism and efficiency of Bill Skinner as Drum Major and Treasurer for thirty eight years and seventeen years respectively is also worthy of note. Another member with an astonishing record of service too is former Side AND Tenor Drummer and Leading Stroke Roddy McDonald, having thirty-two continuous years with the Band, during which he showed an enduring commitment not only to his own appearance in the band, but to those around him as he strove to pass his knowledge onto the juniors.

The Band has never been lacking in real characters – individuals who have brought good humour and levity to proceedings. Right back at the beginning the Band enjoyed the wit of P/M George Cruickshank and the antics of Piper Stevie Brown and Bass Drummer Jim Massie. From the mid 1960’s through to the early 1980’s the Band relished Joker Watt’s repartee. The different side too of Joker was his impeccable appearance in Band uniform and his willingness to promote and encourage neatness amongst his fellow members. Other members who have always had a good craic are piper Michael Brown and drummer Graeme Beattie, and Ian ‘Jabba’ Alexander and Michael Brown (drummer), with both Batman and the Panto Horse making appearances on trips to N.Ireland.

And what of the Boxy Girls?
The Band had to wait nearly forty years before recruiting its first female playing member – Piper Lillian Nicolson – in 1984 which may be put down to its male-dominated military origins. While female members were late in appearing in a Bucksburn Band uniform, the notion of a band for men and boys quickly disappeared and as many women as men make up the band.